The Australian National University offers a number of graduate study programs in Anthropology at graduate diploma, masters and doctoral levels in both the College of Asia and the Pacific (CAP) and the College of Arts and Social Sciences (CASS).

If you are interested in conducting a PhD at ANU you should also look through the list of staff members on the Academics page and email those with interests similar to yours, giving a self-introduction and a description of the topic you would like to research while at ANU. ANU funds and administers a range of scholarships for PhD, Professional Doctorate and Master by research study. The University also administers a number of scholarships funded by the Australian Government and other sources external to the University. The University’s aim is to attract research degree applicants who have a proven capacity for research.  Information about scholarships available for domestic and international applicants can be found at scholarships or the Australian Government Endeavour Awards and Australia Awards scholarships.

There are over 100 graduate students currently based in Anthropology at the College of Asia and Pacific and the College of Arts and Social Sciences at the ANU. They come from a diverse range of countries and their PhD project locations include Australia, Japan, China, East Timor, Cambodia, Myanmar, Iran, Sudan, Ghana, Indonesia, Vietnam, Pakistan and the UK. Topics currently being explored include self-cultivation and religious practice, morality and ethics, materiality, consumer desire, transnationalism, emotion, healthcare, religious identities, livelihood, migration, power and hierarchy, performance and minority and majority relations. People are at varying stages in their projects; some are preparing to leave for the field, some have just returned and are shifting their focus to writing, some are halfway through completing a first draft and others are putting on the finishing touches.

To give you an insight into the PhD journey at ANU you can download the Induction Guide 2015 to the Anthropology Graduate Research Field for post-graduate students: Induction Guide 2015. Students tend to see each other most often at one of three weekly events; either at the Wednesday Departmental seminars where visiting academics and post- doctoral fellows make presentations; the Friday Postgraduate Seminars where students give pre-field and post-field seminars; and the Postgraduate Thesis Writing Group where they share chapters and get advice and support from each other during the writing up phase. People also often meet up for Friday drinks at graduate house and for dinners and coffees. Others cook together, attend film screenings, exhibitions, concerts and play sport. 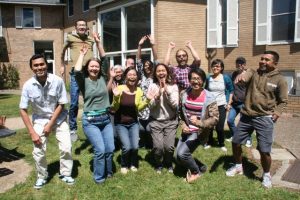 Some examples of the kinds of fieldwork our excellent Anthropology PhD students are doing include the following: 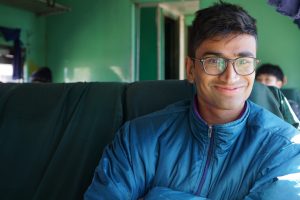 Dinith is a PhD candidate within the School of Culture, History and Language. His research focuses on expressions of masculinity in contemporary Myanmar. Dinith is interested in how individuals navigate masculine identities across different spatial and temporal contexts, and the tensions between wider cultural expectations of gender and contemporary realities. 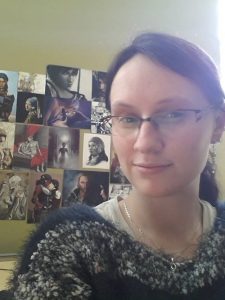 Stephanie Betz is a PhD candidate in the School of Archaeology and Anthropology (CASS) and a media anthropologist investigating the intersection between people, images, and technology in computer games.  Her thesis is an ethnographic study of the relationships conducted with and through figured images among fans of the Dragon Age series of computer games.  It asks: Given the increasingly significant role that media play in shaping our sense of self, other, and world, what effect do fictional media characters have in our lives and, more broadly, the world?  Her research involved 14 months of participant observation on Tumblr, an image-heavy social networking site, supplemented with an anonymous online survey, online interviews, and group meet-ups in six cities around the world.  Her thesis argues that fictional characters take an active and spontaneous role in people’s lives, with the result that we may not be quite the same person, or inhabit quite the same world, after our engagement with figured images.  This has broad implications for societal cohesion in a world in which images are becoming increasingly tailored for individual consumption. 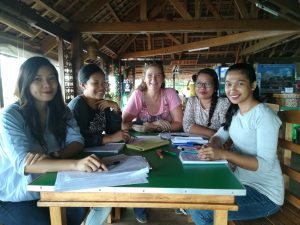 Kathy is a PhD student within the College of Archaelogy and Anthropology (CASS).  With an applied aim, her thesis explores a community resilience model grounded in the human development literature, ultimately for use in aid policy and programming across cultures and contexts (humanitarian, development, fragile states, etc.).  She came to her doctoral studies mid-career, most recently supporting large-scale disaster response programs globally for more than a decade.  These experiences led her to see communities as systems and families as living more fluidly between daily life, crises and disasters than typical program strategies in aid and development acknowledge.  Kathy believes that aid can be provided in such a way that both program design and the ways agencies engage with communities (known formally as accountability to affected populations (AAP)) have potential to contribute to or detract from the community’s resilience. For her field research she used a mix-methods approach (i.e., focus groups, interviews, household survey, etc.) to engage with youth and adults, local and municipal leaders, as well as NGOs and other agencies over eight months in Leyte, Visayas, Philippines where she had previously worked intermittently for three years following Super Typhoon Haiyan (locally known as Yolanda).

Paul Hayes is a PhD candidate in the School of Archaeology and Anthropology. Paul’s interests are in wartime migration and mobility, with a regional focus on the Arabic-speaking Sahel. He is currently doing ethnographic fieldwork among migrants, wrestlers and street vendors in Khartoum, Sudan, where he is a visiting scholar at the Centre d’études et de documentation économiques, juridiques et sociales (CEDEJ). 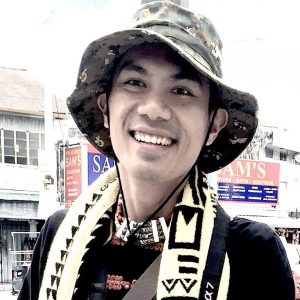 Suliljaw  Lusausatj is a PhD student in the Department of  Anthropology , School of Culture, History and Language, College of Asia and the Pacific. Being indigenous Taiwan (Paiwan), he is interested in the Austronesian cultures among Oceaniana Peoples. Inspired by the concept of ‘our sea of islands’ from Epeli Hau’ofa, his upcoming fieldwork will be exploring tattooing and other forms of material cultures in the societies of eastern Paiwan (Taiwan) and Samoa, and understanding how indigenous self-identities are constructed and transformed by wearing diverse tattooing motifs. Suliljaw views this as carrying a sense of identity amongst the indigenous diaspora and a process of becoming indigenous. With this approach, he echoes the developing theories of indigeneity that are intertwined with articulation, performance and translation.
Suliljaw ‘s work emphasizes a commitment to indigenous and non-indigenous societies as a higher-educated student. Like ‘our sea of Islands’, he is attempting to play a role in strengthening the collaborative relationship between academics and indigenous neighbourhoods, along with linking translocal as well as transnational Indigenous People’s connections. 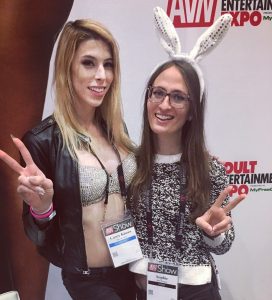 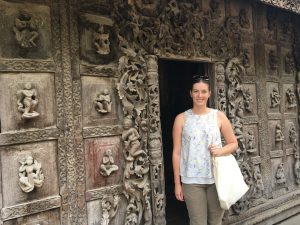 Anthea is a PhD student within the School of Culture, History and Language at the ANU’s College of Asia and the Pacific. She is currently completing 18 months of ethnographic fieldwork in the south of Myanmar’s Shan state. Her research focuses on topics relating to ethnicity and land transformation in Myanmar by looking at the Intha, a water dwelling population occupying the country’s famous Inle Lake, and their practices of floating agriculture. Particular attention will be paid to the life of the tomato – the main cash crop grown through this agricultural technique – as a way of exploring the social, economic and environmental dimensions of ethnicity in contemporary Myanmar. Her wider research interests include environmental change, land use, everyday forms of resistance, anarchy, and labour struggle.

Shengjin Xie is an anthropology PhD student with the Australian Center on China in the World (CAP). His research focuses on the 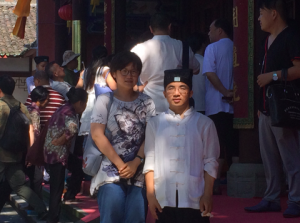 worldly desires of the Daoist clerics in contemporary China as well as the activities that they carry out to realise their desires. He is particularly interested in how clerics gain economic benefits through providing religious services and how they negotiate their relations with state and market. As part of his research he conducted fieldwork in Longhushan, a famous Daoist spot with more than 50 Daoist clerics, for 11 months in 2016. During his fieldwork, he worked as a volunteer in a Daoist temple of Longhushan and spent a lot of his time observing religious activities carried out by the Daoist clerics there as well as participating in banquets and tea-tasting activities hosted by them. 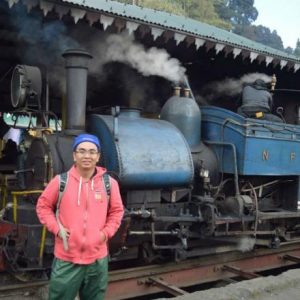 Elvin is an anthropology PhD student within the School of Culture, History and Language (CAP). His research is focused on an ethnographic study of two tribal organizations and their pursuit of the ‘common good’ (rights, development and identity) for the Koyas, a community located in the region of Telangana, India. Through conducting ethnographic fieldwork with the activists belonging to both organizations, he explores how activism is not merely a struggle for rights but rather it serves as an articulation of identity, self, and aspiration. As a corollary, he is also exploring how articulations of tribal identity is mediated through everyday life in a village setting. 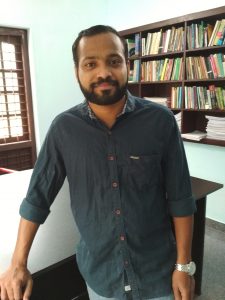 Saidalavi is a PhD candidate within the School of Culture, History and Language (CAP). His research focuses on the mechanisms of social hierarchy among Muslims in Malabar, South India. Conducting ethnographic fieldwork on hierarchical practices and family gatherings, he proposes to explore how social hierarchy is sustained, practiced and rationalised among Muslims. He further explores the implications of these contextual processes for understanding the connections between social hierarchy among Muslims and the caste system in Hinduism. He has published in South Asia Research and Anthropological Notebooks.